You may not be aware but as well as making jewellery and taking on bespoke orders including wedding and engagement rings, I also take on jewellery repairs.

“Do you have an old piece of jewellery which is sentimental to you, that has been passed down from a family member but has broken or is not the right size?”

Contact me as it may be possible to repair or adjust it so that you can wear it again.

“Or perhaps this piece of jewellery is not to your taste and you would like it melted down and made into something more contemporary?”

Either way get in touch to discuss what’s possible. Here is an example of a revamp which I did for a client with their old rings which I made into a pendant and earrings.

Are you someone who has lost one of your favourite earrings? Well it may be possible for me to make another one to match the one you have lost or even make you a new set.

A client contacted me recently about fixing some old gold jewellery. I asked him to bring them into my studio to let me see the pieces. It was possible to fix the catch on his chunky gold chain so he was well chuffed.

He also brought me a single white gold earring that his wife had lost as he wanted me to make one to match. The earring was made in 14ct white gold which he’d bought abroad. It was hollow and cast, so would be time consuming and costly to make an exact replica. I said to him I could hand make something similar in silver (British Hallmarking standards are 9ct, 18ct,) so he decided to go ahead with a whole set in silver rather than just one earring in silver to match the gold one.

I sawed the square wire in half as there would be so much wastage if I filed it to create a triangular shape, then tappered and filed the wire to create the gradation from thick to thin.

This whole process took a bit of time, then I sanded and polished to smooth the piece. I drilled a hole at the top of the wire, a few millimeters in length and soldered the earring wire.

The issue that the client’s wife had had, was that there was nothing to stop the earring being pulled out of the ear (ie.getting caught onto a scarf, etc) as the earring post was so long. So I suggested drilling a hole at the back where the earring post could be clipped in and for extra security added butterfly backs.

These are the finished earrings. 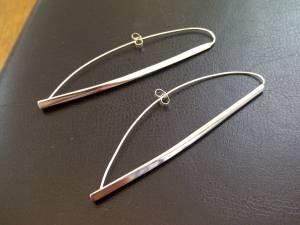 So if you have some miss matched jewellery sitting in your jewellery box and you would like to wear some of your favourite pieces again get it touch.