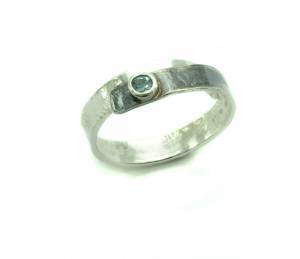 As you may have noticed, I love using coloured stones in my jewellery.  Since it is November I thought I’d write a post about The Topaz which is this months gemstone.

The Topaz is a stunning semi-precious gemstone. I mainly use the dark blue London Topaz and the pale blue topaz  in my jewellery. I’ve recently found out it is the gemstone of the US state of Texas. and most coloured stones are heat treated to empathise it’s colour.

Pure topaz is colourless and transparent but is usually tinted by impurities; typical topaz is wine, yellow, pale gray, reddish-orange, or blue brown. It can also be made white, pale green, blue, gold, pink (rare), reddish-yellow or opaque to transparent/translucent. The natural colour of the topaz is colourless if it doesn’t have any impurities so naturally occurring blue topaz is quite rare. Typically, colourless, gray or pale yellow and blue material is heat treated and irradiated to produce a more desired darker blue.

Mystic topaz is colorless topaz which has been artificially coated giving it the desired rainbow effect. I have only seen the blue topaz in the flesh, as it is the most common in Britain. The Topaz also symbolises friendship so why don’t you treat your friend to one of these pieces.

Below is the topaz triangle pendant and brooch and above is the rollered silver oxidised topaz ring which are available to purchase from my online shop.